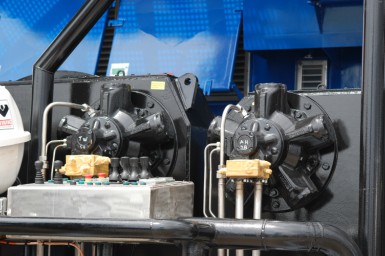 The Small Craft Surveyors Forum, comprising RINA, IMarEST, IIMS, SCMS, NI and YDSA, delivered their annual seminar to an audience of fifty plus onboard Ocean Scene on the pontoons at Seawork 2017. Two of the four presentations were videoed and can be watched free (see below).

John Wills chaired proceedings for the afternoon and acted as Master of Ceremonies.

First up, he introduced Mark Tur, who is a Technical Consultant at the Copper Development Association. Mark demonstrated his depth of knowledge in his presentation as he spoke on the subject of ‘Metals in Marine Environments: Corrosion Behaviour and How to Spot it’; and as he said in his introduction, 35 minutes to do justice to the ‘rather dry’ subject of corrosion is inadequate. But his presentation was no less of interest because of time constraints.

Ross Wombwell, BSc, Technical Manager, British Marine and an ex marine surveyor, followed Mark to the speaker podium. In his presentation, Ross spoke on the subject of ‘International Standards and their use in the Commercial Sector’, an area it became clear that he is passionate about. Starting with a brief history of how standards began and who has been involved in developing them, Ross went on to talk about the many British Standards and ISOs that now exist in the yacht and small craft arena.

After a well earned tea break, Roby Scalvini, Principal Surveyor from Marine Survey Bureau in Palma stepped up to give his presentation. Roby’s topic was ‘Thermal imaging, an increasingly used technique – a look at using it correctly and understanding the findings’. This fascinating subject held the audience’s attention and provoked some detailed questioning at the end. But as Roby was quick to point out, it is necessary to become proficient in the technology to understand exactly what it can show and prove and equally important what it cannot do.

The day was brought to a conclusion by David Greening. An experienced surveyor, David tackled the topic of ‘Stability – a look at freeboard including its importance to SCV coding’. He showed a number of images of vessels where the freeboard looked highly questionable to the amusement of the audience.