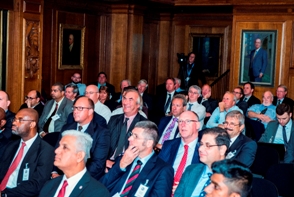 Report on the IIMS London Conference 2015

The IIMS London Conference 2015 was one of, if not the best attended events ever organised by the Institute. It was pleasing to see the most fitting of venues in which to meet for a group of marine surveyors – The Old Library at Lloyd’s of London – full to capacity on the opening morning of what proved to be a day and a half of captivating, informative and in some cases, downright thought provoking presentations.

Around 120 IIMS members, combined with others from the maritime industry, from all over the world had booked to attend the event. The Conference organisers have been delighted by the wealth of positive feedback they have received since the event via various social media platforms and direct to the head office.

Session 1
The first day was opened by IIMS Chief Executive Officer, Mike Schwarz, who spoke about the changing face of the Institute and some of the current initiatives being rolled out by the organisation. Next to speak was Chris Baldwin from IMCA. He promoted the need for accreditation and standards with particular reference to the CMID vessel inspector programme. Ken Hickling kept the attention of the audience as gave a passionate presentation about coatings and the challenges of surveying the paint job!

Session 2
Bill McNamee, representing lead sponsors DGS Marine Group, called upon his 50 years of surveying experience to deliver a talk on surveying for P&I Clubs, but from a crew perspective. Uday Moorthi followed him to the podium and spoke in depth about the role of the surveyor in new build projects. To close the session, Kevin Clarke covered the topic of the Lloyd’s Open Form before introducing Capt Nick Sloane to speak about the role of a Special Casualty Representative.

Session 3
Karen Brain and Amanda Ridd of Matrix Insurance drew the short straw to deliver the after luncheon slot. They gave a concise and informative presentation about the benefits of meditation. Ian Millen took to the speaker podium and spoke eloquently about the importance of maritime security, something of a necessity in today’s modern world. Capt Zarir Irani brought session 3 to a close in his usual inimitable style, as he talked about building and developing a surveying company in today’s complex and competitive business world.

Session 4
This session proved to be very absorbing with two thoroughly interesting presentations back to back. Capt Nick Sloane gave a most fascinating insight into the complexities of the parbuckling project of the Costa Concordia. And it fell to Capt Ruchin Dayal to bring the first day to a conclusion. He did so talking about the changes to the IMSBC code and what surveyors should be aware of relating to the challenges of cargo of iron ore fines.

Session 5
The second day was opened by Bruno Bouckaert from Hull Vane. He spoke about the new technology and the savings the Hull Vane system can make. The very recognisable figure of Milind Tambe took to the podium and he presented on the integrity of digital images. Capt John Noble followed and gave an insightful case study on the Hoegh Osaka incident that took place off the UK south coast earlier this year. Barbara Spiller then turned the focus sharply on to business and discussed knowing when and how to engage a business coach or mentor. Dr Risto Talas concluded the conference with a thought provoking presentation on the use of drones in surveying and moving to a paperless system.

The organisers of the IIMS Conference wish to thank the following for their help and support.
• The Conference sponsors (lead sponsors: DGS Marine Group; Platinum sponsors: Constellation Marine Services and Dinner sponsors: Britannia Maritime Security for their generous support; plus supporting partners Matrix Insurance, Cordstrap and Cygnus Instruments.
• The speakers who presented eloquently and passionately, enthusing the audience with their specialist knowledge.
• The team at Lloyd’s of London for their help and support both before and during the event.
• The IIMS head office team for their immense support and dedication in ensuring the event came together successfully.
• And finally all the delegates who attended Conference and helped to make it such a success.

Conference Dinner onboard HMS Belfast
The Conference dinner aboard HMS Belfast on the Monday evening, sponsored by Britannia Maritime Security, proved to be a great success. The intimate surroundings of the old ship, berthed in the River Thames, created a pleasant ambience and atmosphere in which to dine and network with colleagues.

HMS Belfast itself was opened specially before dinner and a number of guests took the opportunity to give themselves a self guided tour around the ship, enjoying the many artefacts that are to be seen. The weather was kind that evening and just after 19.00hrs, guests started to assemble and mingle on the aft deck for a drinks reception prior to dinner as Tower Bridge glistened behind in the setting sun.

Immediately prior to dinner being served, Eur Ing Jeffrey Casciani-Wood gave the remembrance address, a poem entitled ‘The Lifeboat’. Mike Schwarz invited guests to remember Capt Paul Townsend FIIMS, who had sadly passed away in recent weeks and also Andrew Ashman, who had tragically lost his life during the Clipper round the world yacht race. Peter Morgan said Grace and IIMS President, Bertrand Apperry, made the loyal toast to The Queen.

The first of three after dinner speeches was given by Mike Schwarz. As he addressed guests, he paid tribute to a number of Directors, Officers and head office staff of the Institute, all of whom have given sterling service to the organisation. He announced several presentations, the first of which was to Anne Liversedge who has decided to leave IIMS after nearly 8 years in the education department. Geoff Waddington was given a small gift to recognise his work as Education Committee Chairman, a role he held for three years before standing down earlier this year. Past President, Peter Morgan, was presented with an engraved weather system as a memento and to acknowledge all he has done for the Institute following his decision to formally retire and stand down.

Mike then moved on to announce two Blue Water Awards. These are presented to people outside the IIMS who have made a significant impact on the organisation. The first of the recipients was Chris Baldwin from IMCA, who has given immense help and support as the new CMID vessel inspector accreditation scheme has been rolled out. The second Blue Water Award was presented to Ken Hickling of Akzo Nobel to recognise the substantial help and support he has provided to support the new Registered Marine Coatings Inspectors Course.

The final presentation of the evening was a Lifetime Achievement Award, which was given to Eur Ing Jeffrey Casciani-Wood to celebrate 70 years in the surveying and maritime world. Jeffrey has had a varied, successful and colourful career and although no longer a practicing marine surveyor, he continues to keep his hand in. He is a Chartered Engineer with the additional title of European Engineer. Also, he is a Fellow of RINA, Hon. Fellow of IIMS and a past President and a Fellow of SCMS. Furthermore, Jeffrey is a Fellow of the Institute of Diagnostic Engineers and its current President. He is also on the IMO list of Marine Consultants (through IIMS) and holds an ONC, HNC and endorsements in naval architecture, plus the IIMS Diploma in Marine Surveying.

Jeffrey Casciani-Wood began his career in January 1945 when he worked at the London Graving Dock Ltd on a pre-apprenticeship training course. To date he has worked in over fifty countries and from 1973 to 2005 practiced as a freelance marine surveyor mainly on small craft until retiring. Jeffrey continues to act as mentor to a number of junior surveyors.

The dinner guests rose as one to salute and applaud Jeffrey as he came forward to accept the Award in what was a truly emotional moment.

Thanks are due to the guest speakers – Capt Andy Winbow, Assistant Secretary-General of IMO and also the Director of the Maritime Safety Division, who spoke about the work of the IMO. It was left to ‘funny man’ Peter Hancock to bring the evening to a close and he did so in spectacular fashion keeping the guests in fits of laughter.

During the evening, guests contributed to The President’s chosen charity, Les Sauvateurs en Mer. A total of £600 was raised and IIMS would like to thank all those who generously donated.