Traditional fouling release coatings consist of a silicone elastomer (PDMS) and rely on a low surface tension (hydrophobic) and a low modulus of elasticity, usually with a good initial foul free performance. With time, the coatings ability to self-clean is lowered, which results in a higher hull skin friction. The invention behind the 3rd generation fouling release coatings is a unique blend of silicone polymers that has and maintains a more hydrophilic surface, with fouling release performance that lasts. The foul free period is longer, and required speed for self-cleaning is lower. This results in a lower hull skin friction over time with potentially lower fuel consumption.

Marine biological fouling, usually termed marine biofouling, can be defined as the undesirable accumulation of micro-organisms, plants and animals on artificial surfaces immersed in sea water. The adverse effects caused by biofouling are higher frictional resistance with subsequent speed reduction or higher fuel consumption, loss of manoeuvrability and higher frequency of dry-dockings.

The ban of the TBT-based paint products has been the catalyst of a major change in the antifouling paint industry. Several antifouling products have already reached the commercial market to meet the new generation TBT-free antifouling requirements. The antifouling properties in these paints have to be managed by biocides mixed into the paint formulation. This is traditionally done by addition of cuprous oxide (Cu2O) as a pigment, and in addition organic co-biocides to provide the necessary biocide activity replacing that previously obtained from TBT.

It is stated that fouling does not take place significantly at speeds higher than six knots (water flow rates) [Rascio, 2000], the influence of speed on the formation of bacterial films has also been reported [Egan et al., 1987]. However, the nature of the substrate, which clearly affects the adhesion mechanisms, depends on the coating surface properties.

This constitutes the basis for the fouling release and “easy-to-clean” concepts, presently the most promising non-toxic alternative. With some exceptions, the majority of fouling release systems are based on pure poly (dimethylsiloxane), also known as PDMS. The PDMS polymer is flexible, it has a low surface energy and it is smooth – all parameters that facilitate easy cleaning, each in its own way.

Non-stick fouling release coatings are based on a technology which prevents the adhesion of fouling organisms by providing a low-friction, ultra-smooth surface on which organisms have great difficulty in adhering. The coatings do not inhibit the fouling settlement, but provide self-cleaning when sailing at a certain speed at a certain activity, typically minimally 15kn. at minimum 75% of the time.

Fouling release coatings have their origin in the desire for a biocide free system and they were conceived almost simultaneously with self-polishing copolymers, which means that it has been under observation the past 30 years. On these types of coatings fouling is not prevented from settling, as in the case of traditional antifouling, but in practice the bond between the fouling organisms and the coating surface is so weak that it breaks by the weight of the organism itself or by the water pressure and current it is exposed to.

Generally speaking, fouling organisms are very different and known types, such as barnacles, mussels, algae, all possess their own type of glue which is secreted during the attachment to a surface. The glue is typically protein based and undergoes a chemical cross linking. An early attempt to avoid attachment of fouling organisms was to create a surface with a very low surface tension using certain fluoropolymers in order to obtain the lowest possible surface tension and thus a good release effect. Poly (tetrafluoroethylene), [Brady et al. 1994] has been described as such. One of the features of PTFE is a low surface tension, 16-20 mN/m, nevertheless the coating failed to serve its purpose, as it became apparent that several other properties of the coating were important to show release properties. A low micro roughness is important to prevent biological adhesives from creating mechanical interlocking in pores and a low elastic modulus combined with the coating thickness, controls the fracture mechanics of the interface, and was found very early to be equally important. This is expressed in equation (1) [Brady et al. 2000]. 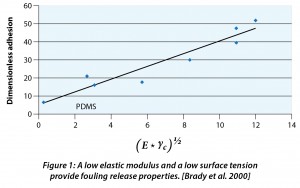 Brady’s work concluded that PDMS based fouling release coatings, which have low surface tension, low modulus of elasticity and a low micro roughness, favoured easy release when considering the self-cleaning.

Baier proposed that the minimum adhesion of protein fouling is exhibited at a surface tension of 24 mN/m [Baier et al.1971], which is the surface tension of pure PDMS. However, this equation only embraces the adhesion, and does not describe the settlement of fouling in a general perspective.

Multiple publications [Finlay et al. 2002] report that the ideal substrate for one fouling type may not be the same for another. The Ulva zoospore was shown to have a higher affinity to hydrophobic substrates, but with very weak adhesion to such, while diatoms showed strong adhesion to hydrophobic surfaces. Thus, solving the problem with adhesion for one species may not be the ideal solution for another.

Andrade [Andrade et al. 1973] claims that hydrogels shows resistance towards platelet adhesion. A hydrogel consist mostly of water attracted by an insoluble, hydrophilic polymer. The use of hydrogels is common in medical applications [Henriques et al. 2005], though it is typically combined with some sort of antibiotic or biocidal agent [Wirtanen et al. 1998, Ahearn et al. 2000].

While traditional PDMS exhibit excellent fouling release behavior at speeds above 15kn and high activity, the coating does not inhibit fouling settlement when the coating is exposed to idle periods, and has a tendency to obtain slime fouling after such exposures. Slime fouling poses a particular challenge because of its very low surface profile, and can be difficult to remove by sailing, even at high speed. Since slime fouling induces a lower fuel saving [Schultz, 2007] than would be expected from a clean PDMS coating, the general solution to this problem has been underwater hull cleaning to renew the fuel saving potential, but ideally the slime fouling should never settle.

Hempel A/S has taken the traditional fouling release coatings one step further. Recent findings have shown that a PDMS coating with a hydrogel introduced in the water interface of the coating provides an improved resistance towards algae and slime fouling, while the intrinsic properties of pure PDMS, such as release mechanisms and drag reduction, remains.

Contact angles with distilled water were measured on different compositions. Table 2 shows the contact angles of a traditional fouling release coating and the Silicone Hydrogel. Substrates prepared by drawdown method.

A test site in the Mediterranean has been used to evaluate the slime formation over time. Panels coated with experimental paint compositions are placed in near vicinity of each other and evaluated at regular intervals. The location offers substantial algae and slime fouling, which makes it ideal for the development of fouling release coatings. Figure 2 shows a clear reduction in slime coverage after one year of static immersion.

Real life dynamic testing also reveals improved performance compared to traditional cupper based, self-polishing antifouling as observed on Figure 3. The vessel has been in service for 25 months trading worldwide with 60% activity and an average cruising speed of up to 13kn. with idle periods.

It can be concluded, that a surface modification of a pure PDMS can improve the resistance towards the settlement of fouling on traditional fouling release coatings, particularly slime and algae fouling. The more hydrophilic character of the hydrogel silicone compared to a standard fouling release silicone will clearly make it a difficult substrate for marine organisms to settle on. Both static and dynamic tests have proved that this new technology is performing better than earlier generations of fouling release coatings.

The evolution to Hempasil X3+

Hempasil X3 was launched by Hempel in 2008, a concept based on a unique blend of copolymers that create a hydrophilic surface atop the silicone coating. This surface is referred to as a hydrogel, a revolutionary shift in technology that resulted in a significant improvement of the fouling release performance. In December 2015, Hempel went one step further and launched Hempasil X3+, which is built on the industry proven Hempasil range and optimized further to give even better protection of the immersed vessel with longer lasting performance.

Hempel further developed and fine-tuned the hydrogel of the Hempasil range to give a stronger bond of the water molecules and consequently a better and longer lasting resistance towards fouling settlement.

Effect of the hydrogel: The surface of a PDMS based coating will change from hydrophobic (below left) to hydrophilic (below right) once the hydrogel is formed.

Furthermore, in order to apply its adhesive, the organism would need to first remove the entrapped water. This requires energy since the water is strongly bound in the hydrogel. Therefore fouling organisms such as bacteria and cyprids will be effectively prevented from settling.

Hydrogel is formed on the surface of a PDMS coating. Water molecules are entrapped in the hydrophilic polymer and fouling organisms will not settle on the surface.

Baier RE, and DePalma VA. The relationship of the internal surface of grafts to Thrombosis, In Dale WA, (Ed) Management of Occlusive Aterial Disease, Yearbook Medical Publishers,Chicago, 1971, pp 147-163