ICOMIA brings together national boating federations in one global organisation and represents them at an international level, presenting a strong and united voice when dealing with issues challenging the industry.

No less than 35 national federations across the world are full members of ICOMIA today. Its members include the vast majority of the industrialised countries from North America across to Japan and China and from Finland to New Zealand.

ICOMIA’s working committees predominantly consist of its member associations and provide forums where the national associations can share their experiences and most importantly plan collectively to address issues facing the industry worldwide. ICOMIA’s objectives are to provide a forum for the exchange of views between the different national marine industry associations; to produce internationally agreed standards to ensure high quality and safety of industry’s products; to remove all barriers to trade, wherever they may exist; to promote boats and to give guidelines where appropriate.

With the support of its members throughout the world and in conjunction with the appropriate associations, ICOMIA lobbies international authorities and major organisations, publishes documents and guidelines and produces tools to facilitate the growth of the industry.

Numerous beneficial improvements within the marine industry are results of ICOMIA’s hard work and dedication; not least the quarter century spent refining and safeguarding the EU’s Recreational Craft Directive (RCD).

ICOMIA championed the development of the RCD in the 1990s, which was fundamental to opening the EU market and other markets to accept EU-certified boats, and it continues to advise on its development today. The RCD is a European Union Directive setting out minimum technical, safety and environmental standards for the manufacture, import, distribution and trade of boats (between 2.5m and 24m), personal watercraft, marine engines and components on the EU single market as well as Iceland, Norway, Lichtenstein and Switzerland (as part of the European Economic Area/European Free Trade Association), and Turkey (candidate EU member).

Linked to the RCD is the development of over 60 ISO (International Organization for Standards) Standards for small craft; spearheaded by the ISO Technical Committee for Small Craft Standards (TC 188) – the committee dedicated to small craft under 24 meters. TC 188 was established over 25 years ago and develops standards for all aspects of small craft design and construction, including safety-equipment, systems and handling. ICOMIA funds the processing of developed and revised Standards within the TC 188 secretariat.

Since the RCD came into force, much of the work within TC 188 has been devoted to developing a set of standards to support the Directive. TC 188 has 16 Working Groups and has published approximately 80 Standards (and continued revisions) – many of which are harmonised and used to demonstrate conformity with the Essential Requirements of the RCD.

ICOMIA remains committed to developing additional ISO standards for the recreational marine industry, to prove their acceptance not only in Europe, but in a global context. To this effect, ICOMIA has produced a ‘Small Craft Standards Bulletin’, providing industry stakeholders early notification on changes to existing standards and modifications to production methods; as developed and maintained by TC 188.

ICOMIA’s Small Craft Standards Bulletin clearly defines the current stage of an ISO Standard depending on whether it is in: Committee, Enquiry, Approval, or Publication. “On completion, Standards that support the RCD requirements are referenced in the Official Journal of the EU (OJEU)” explains Patrick Hemp, ICOMIA Technical Consultant. “This step leads to a ‘harmonized standard’ which in turn provides a presumption of conformity for a certain legal requirement. A sensible transitional period is determined during which both the revised standard, as well as the superseded version provide the presumption of conformity”.

Conformity is and always will be a challenge for those operating internationally. For years, US companies interested in exporting boats to Europe and European companies wishing to export to the US had found themselves in a difficult situation due to the different sets of standards used on the two continents and the requirement to comply with them both. A globally adopted set of standards did not exist.

In the US, the standards used have been developed by the American Boat and Yacht Council’s (ABYC) Project Technical Committees. Each Project Technical Committee is made up of members from all segments of the marine industry including manufacturers, surveyors, boatyards, repair facilities, the US Coast Guard and the general public. Mainly derived from the US Code of Federal Rules (CFR) and other domestic laws, the ABYC system uses the local US approach to defining boat standards. ABYC is also a point of reference for any boat builder unclear about the application of standards.

In contrast, the ISO standards’ approach is global and the standards are meant to be self-sufficient. Their use is promoted by the RCD but applicable to all types of boat construction and design, including commercial boats. The two standards systems have different requirements for the construction of boats, which are based on separate calculations and criteria.

Any boat builder interested in exporting overseas faced a severe challenge in trying to comply with both standards’ systems. Initially the comparison was made between the ABYC and ISO standards, but other standards are also being considered.

It was with this in mind that ICOMIA decided to form a dedicated standards’ harmonisation working group in 2007.

Made up of partners from ABYC, British Marine, ICOMIA, the International Marine Certification Institute, and the National Marine Manufacturers Association, the working group meets twice a year to compare the different aspects of the two standards’ systems in order to develop universal guidelines in order to help boat builders comply with both systems.

For many years, boat manufacturers selling to the global community have had to independently figure out the differences between their own domestic standards and ISO standards developed to support the RCD.

Nine universal guidelines have so far been published by ICOMIA, but many more are in the pipeline.

The Global Conformity Guidelines are aimed at boat builders with previous experience of either the ABYC or ISO standards. They are not meant to replace or guarantee compliance with either standard system, but to act as a guide for the user. The guidelines are available for download from in the ICOMIA Online Library (www.icomia.com/library), as annexes to the ABYC standards or for purchase from www.rulefinder.net.

Another of ICOMIA’s most popular initiatives to bridge the gap between boatbuilders and RCD compliance is its Scantlings Calculator; a calculation method to assist builders comply with ISO Scantling standard 12215 Part 5.

In order to comply with the RCD, builders face challenges when self-assessing scantlings for craft of hull length less than 12m in all design categories. They use the Harmonised Standard which provides the Presumption of Conformity, however the complex nature of these documents often force them into hiring a consultant.

In response to these issues, ICOMIA’s Technical Committee initiated a study (sponsored by the International Marine Certification Institute), and with approval from ISO, commissioned Southampton Solent University to develop a series of spread sheets designed to be used in conjunction with this ISO standard. The team developed six modules which cover most of the scope of Part 5; with an emphasis on simplified data entry. A seventh spread sheet, ‘Core Helper’, provides a link between a number of common trade name cores. The ‘Scantlings Calculator’ can be accessed for free to legitimate owners of Part 5 at www.icomia.com. 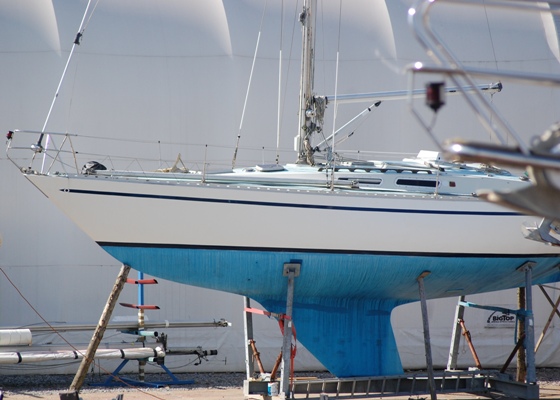 • Design Categories (A, B, C, D) no longer have a descriptor and are determined by the wind force (in Beaufort Scale) and significant wave height.
• The composition of the Watercraft Identification Number (WIN), previously called the CIN has been changed and the Manufacturers Identification Code (MIC) needs to be assigned by the national authority of a Member State within the EU. This means that manufacturers located in Non-European countries will no longer be able to apply for this code from the national authority in their own country if exporting to Europe but shall request it from a national authority in the EU.
• A means of re-boarding a craft after falling overboard needs to be accessible from the person in the water.
• Good all-round visibility from the main steering position on motor, and now also, sailing craft needs to be carefully considered.
• All black water discharge on a craft need to be connected directly to a holding tank or water treatment system
• Emphasises the requirements needed to complete a Post Construction Assessment (PCA) – for private imports only.
• Total engine (both diesel and petrol) exhaust emission limits have been further reduced and are now in-line with USA (EPA & CARB) requirements.

The obligations and responsibilities of all economic operators, i.e. manufacturers, importers (both commercial and private ones) and distributors have been further defined in the new Directive. It requires boat, personal watercraft and engine manufacturers to keep a technical file on all relevant data, and to officially declare the compliance of their product using a declaration of conformity template (DoC), to affix the CE marking to it, and to inform users about safe use and maintenance. Importers and Distributors have an obligation to ensure these processes are completed before placing on the EU market and Importers will need to add their name, trademark and contact details to the craft or product.

In anticipation of Directive 2013/53/EU, which became applicable on 18 January 2016, ICOMIA, together with European Boating Industry produced an invaluable ‘RCD Guide’ applicable to boating professionals intending to manufacture, import, distribute and sell products on the EU single market as well as Iceland, Norway, Lichtenstein and Switzerland (as part of the European Economic Area/European Free Trade Association), and Turkey (candidate EU member).

In order to comply with new Directive on the relevant markets, boats, engines, personal watercraft and certain components (whether imported or domestically produced) will have to be assessed according to the new EU rules. Types and models in production and assessed according to the “old” EU Directive 94/25/EC, as amended by Directive 2003/44/EC, will have until 17 January 2017 until reassessment. There is also an extra transition period, until 18 January 2020, for small and medium-sized enterprises to comply with Stage One exhaust emission limits. This derogation is limited to spark ignition engines with power equal to or less than 15 Kw.

“At our suggestion the new RCD emphasises and clarifies requirements needed to complete a Post Construction Assessment (PCA) for private imports – however issues such as Craft Identification still need clarification. Our continued commitment is to ensure the supporting standards are in place by the end of the transitional period in January 2017” says Udo Kleinitz, ICOMIA Secretary General, “This is why our Guide is invaluable as it provides practical, easy-to-understand advice on how companies – especially smaller ones without dedicated product compliance staff – can navigate and comply with the Directive”.

Featuring a quick guide as well as detailed chapters, the Guide also contains detailed comparisons of both the new and old Directives with reference to the relevant harmonised standards (used to gain the presumption of conformity) and various informative links to further resources.

The Guide, which is currently available in nine languages, is free for ICOMIA and EBI members and available for purchase as a downloadable App on both Apple and Android tablets (for only €3.99) and as a PDF (€2.99) supported by any device.

Further details can be found at www.europeanboatingindustry.eu/appsite or by visiting www.icomia.org and clicking the banner.

For the past 50 years, ICOMIA has sought to break down all barriers to trade and support its members in every way possible by giving recommendations and providing the necessary instruments needed to navigate bureaucratic choppy seas. With ICOMIA monitoring emerging technical regulations and guiding the developments and revisions of ISO standards and the RCD, it remains aware of technical developments across all sectors and is uniquely positioned to act as the voice of the recreational marine industry.