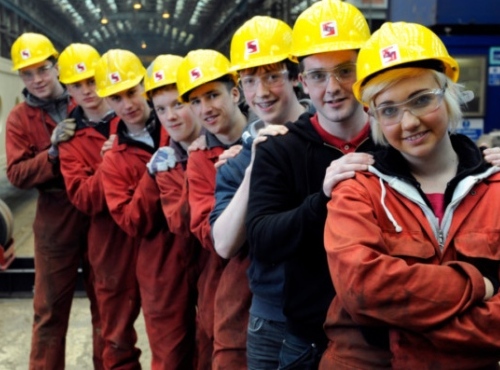 Despite recruitment across Britain’s marine industry increasing by 2.7% in 2014/15, and with a further increase of 2% predicted for 2015/16, new statistics released today at the Southampton Boat Show have revealed that 30% of companies have identified critical skill gaps that are holding their businesses back.

The majority of the workforce growth has reportedly come from the boat manufacturing (20%), equipment supply chain (20%), and boat distribution and retail (15%) sectors, with the industry’s 4,500 businesses now employing 31,600 people.

The statistics revealed that technical skills are perceived to be the biggest “obstacle to recruitment” in the British marine industry’s, with 74% of businesses citing a lack of technical training, such as manufacturing and engineering as a barrier, compared to the UK-wide average of 41%: “For an industry where one in two jobs are boat building and repair and equipment manufacturing (34% and 13% respectively) the need to plug the skills gap is becoming more important for future growth.”

Soft skills are also a concern to employers, with 24% identifying a lack of soft skills as a barrier to finding the right candidates, resulting in a push in such training. Competition from other industries was further identified as a factor affecting the ability to recruit.

Howard Pridding, chief executive of British Marine said, “The marine industry is dynamic and growing. We offer variety, good pay and opportunities to work at some world-leading companies. Businesses want to take on more staff, but a lack of relevant skills is a barrier, and while many of our members are taking on the challenge themselves, more can be done by Government to back the industry.

“We welcome the renewed emphasis on an industrial strategy, but it is crucial that the marine sector forms a central part of any plan and is given the support it needs.”

As a haven for start-ups, with over 50 new businesses registered in the last year, the UK marine industry will need access to a suitably skilled workforce.

Mathew Hornsby, co-founder and sales director at Williams Jet Tenders, who are exhibiting at the Southampton Boat Show this week, commented, “We are seeing demand for British boats from all over the world, particularly in the USA. We are growing and we want to hire more people to meet this demand, but a lack of specialist manufacturing skills in the market is a future challenge for the industry.

“We’ve increased our workforce by 15% in the last twelve months with full-time employees and apprentices, however the pool of talent isn’t infinite. We’re making a big push to expand the training opportunities we offer and engage with the next generation of our workforce. The marine industry is an important contributor to the economy and part of our country’s heritage – we should be supported more by Government.”

Across the industry, businesses are taking on the skills gap by themselves, turning to apprenticeships or training-up people in house, rather than relying on a flow of talent from other markets or their competitors. Earlier this year, Sunseeker International Ltd announced a record intake of apprentices in 2016.

Mathew continued, “We’ve set up our own apprenticeship scheme, taking 14 to 15 year olds in our local community and running a Saturday morning boatbuilding school. If successful, the youngsters progress on to a full-time apprenticeship position with Williams Jet Tenders.”