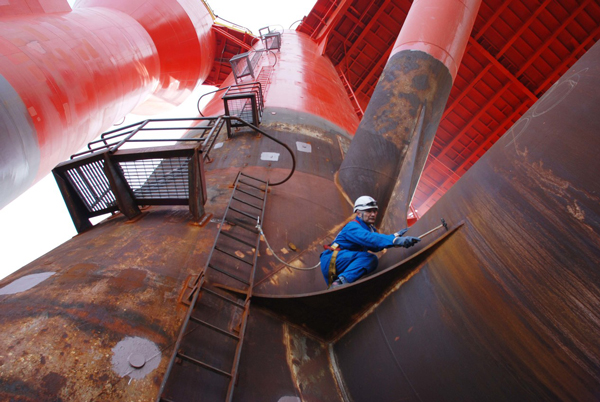 The classification society DNV GL has launched a recommended practice to provide what it says is the first international guidance on in-service inspection planning for fatigue cracks in offshore structures.

The guidance will save operational costs by using a risk-based approach to identify “hot spots” requiring inspection, according to DNV GL – particularly important since low oil prices and a reduction in newbuilds have made the integrity of existing assets a high priority in the oil and gas industry.

The cost of inspections of marine structures such as jackets, semi-submersibles and floating production vessels can put a strain on already challenged operational budgets, driving the need to develop inspection programmes that address only critical areas, the classification society points out.

“What we are commonly experiencing is the use of inconsistent inspection planning methodologies, which can result in costly inspections at non-critical areas; or worse, no inspection at critical areas,” said Kjell Eriksson, regional manager for Norway at DNV GL – Oil & Gas.

The cost reduction is obtained by reducing the overall inspection and maintenance scope, still ensuring cost-efficient and safe operation of the asset. This is done by using risk- based methods in identifying the critical areas that need to be inspected – so-called “hot spots” – and non-critical areas that don’t need further assessment.

“Fatigue cracks can cause significant damage to offshore structures. The criticality of fatigue cracks can vary, which, combined with costly inspection programmes, drives the importance of developing accurate methods for identification of fatigue-critical areas,” said Gudfinnur Sigurdsson, technology leader of marine structures at DNV GL – Oil & Gas. “The use of risk-based inspection planning for identification of critical areas for inspections will result in reduced inspection programmes, and thereby a corresponding significant reduction in inspection and operational costs.”

In-service inspection for fatigue is carried out to assure that possible cracks in a structure don’t exceed a critical level. The outcome of in-service inspections can then be used to update the estimated fatigue reliability of the structure, DNV GL says.

The RP includes guidance on fatigue analysis methods for jacket structures, semi-submersibles and floating production vessels (FPSOs); the effect of methodology/refinement used in fatigue analysis with respect to calculated fatigue life; and basic distributions of parameters required for calculations of stochastic properties for load effects and capacity. Also included is guidance on the derivation of target reliability level in relation to the consequences of a fatigue failure, and the methodology for probabilistic analyses in planning inspections for fatigue cracks.