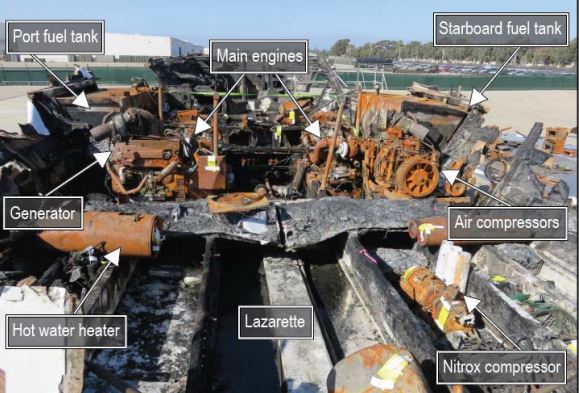 Following months of complex and forensic investigation, the National Transport Safety Board (NTSB) has published its official report on the fire onboard the small passenger vessel Conception in September 2019 off California, which killed 34 people. It has highlighted poor oversight by the company and USCG regulatory issues as key areas of concern which were revealed in a recent preliminary report. There is a long list of recommendations for the USCG to adhere to following this most harrowing accident.

About 0314 on 2 September 2019, the USCG received a distress call from the Conception, a 75-foot-long small passenger vessel, anchored in Platts Harbor on the north side of Santa Cruz Island, California, reporting fire. When the fire started, 5 crewmembers were asleep in their bunks in the crew berthing on the upper deck, and 1 crewmember and all 33 passengers were asleep in the bunkroom below.

A crewmember sleeping in an upper deck berth was awakened by a noise and got up to investigate. He saw a “glow” outside. Realizing that there was a fire rising up from the salon compartment directly below, the crewmember alerted the four other crewmembers sleeping on the upper deck.

The captain was able to radio a quick distress message to the Coast Guard. Crewmembers jumped down to the main deck and attempted to access the salon to assist the passengers and crewmember in a bunkroom below the main deck but were blocked by fire and overwhelmed by thick smoke.

The crew transferred to a recreational vessel anchored nearby where the captain continued to radio for help, while two crew returned to the waters around the burning Conception to search for possible survivors.

At 0427, the USCG and other first responder boats began arriving on scene. Despite firefighting and search and rescue efforts, the vessel burned to the waterline and sank just after daybreak, and no survivors were found.

A total of 33 passengers and one crewmember died. The surviving crew were transported to shore, and two were treated for injuries. Loss of the vessel was estimated at $1.4 million.

– NTSB has determined that the probable cause of the accident onboard Conception was the failure of Truth Aquatics, Inc., to provide effective oversight of its vessel and crewmember operations, including requirements to ensure that a roving patrol was maintained, which allowed a fire of unknown cause to grow, undetected, in the vicinity of the aft salon on the main deck.

– Contributing to the undetected growth of the fire was the lack of a USCG regulatory requirement for smoke detection in all accommodation spaces.

– Contributing to the high loss of life were the inadequate emergency escape arrangements from the vessel’s bunkroom, as both exited into a compartment that was engulfed in fire, thereby preventing escape.

NTSB identified the following safety issues in this accident, some of which have been identified in previous accidents involving passenger vessels:

In accordance with fire safety regulations applicable to the Conception in Title 46 Code of Federal Regulations Subchapter T, the only compartment that was required to be fitted with smoke detectors was the passenger bunkroom, since it was the vessel’s only overnight accommodation space. The Conception was equipped with two modular smoke detectors in the bunkroom—one mounted on the overhead of each of the port and starboard aisles.

The Conception had no smoke detectors anywhere in the main deck salon area where crewmembers reported seeing the fire. The nearest heat detector was well forward in the galley, a deck above the bunkroom, and was not intended to be utilized as a fire detector for the entire salon.

Additionally, all detectors aboard the vessel only sounded locally. Although the Conception met the regulatory compliance for smoke detectors in the bunkroom where the passengers and crewmember slept, the fire above them in the salon would have been well developed before the smoke activated these detectors.

2. Lack of a roving patrol.

NTSB investigators found that, prior to the accident, the Conception and other Truth Aquatics vessels were regularly operating in contravention of the regulations and the vessel’s Certificate of Inspection, which required a roving patrol at night and while passengers were in their bunks to guard against, and give alarm in case of, a fire, man overboard, or other dangerous situation.

During the investigation, NTSB staff visited other dive boats operating from Southern California ports and harbors and spoke with their owners/operators. During informal discussions, all owners/operators stated that night patrols were assigned whenever passengers were aboard, but the procedures for the patrols varied greatly.

When asked by investigators, Coast Guard inspectors stated that they could not verify compliance with the roving patrol requirement, since inspections were not conducted during overnight voyages with passengers embarked.

The Conception was designed in accordance with the regulations in Subchapter T in force at the time of construction. As such, the vessel was required to have at least two emergency egress pathways from all areas accessible to passengers.

The Conception had two means of escape from the bunkroom: spiral stairs forward and an escape hatch aft, accessible from either port or starboard aisles by climbing into one of the top aftermost inboard bunks.

However, both paths led to the salon, which was filled with heavy smoke and fire, and the salon compartment was the only escape path to exterior (weather) decks. Therefore, because there was fire in the salon, the passengers were trapped, and the crew was not able to reach them.

If regulations had required the escape hatch to exit to a space other than the salon, optimally directly to the weather deck, the passengers and crewmember in the bunkroom would have likely been able to escape.

During the investigation, the NTSB found several unsafe practices on company vessels, including a lack of crew training, emergency drills, and the roving patrol.

If the company had been actively involved in ensuring the safe practices required by regulations were enforced, most notably the requirement for a roving patrol, it is likely this accident would have not happened. Had a safety management system been in place at Truth Aquatics, it would have likely included procedures for roving patrols that complied with regulations and a company-involved audit process for identifying and correcting when non-conformities with the patrol requirements existed.

As a result of its investigation of this accident, the NTSB makes the following ten new safety recommendations:

-To the US Coast Guard

9. Until the US Coast Guard requires small passenger vessels with overnight accommodations to provide a secondary means of escape into a different space than the primary exit, share the circumstances of the Conception accident with your members and encourage your members to voluntarily do so.

10. Implement a safety management system (SMS) for your fleet to improve safety practices and minimize risk.

NTSB also reiterates Safety Recommendation to USCG to require all operators of US-flag passenger vessels to implement SMS, taking into account the characteristics, methods of operation, and nature of service of these vessels, and, with respect to ferries, the sizes of the ferry systems within which the vessels operate.