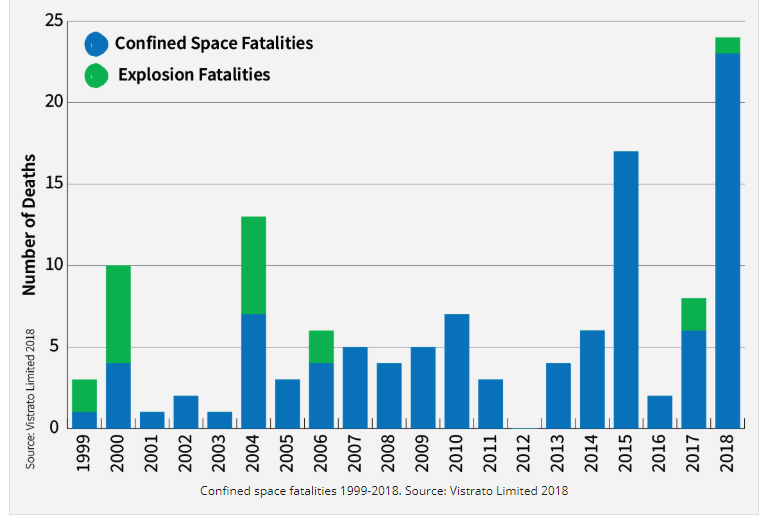 The International Transport Workers Federation (ITF) has underlined a shocking spike in deaths in confined spaces, as a workplace hazard long familiar to the shipping industry.

Since January 2018, 16 dockers and 12 seafarers have died from asphyxiation or explosions in confined spaces – or from falls after passing out due to bad air.

To put the recent deaths in perspective, there have been a total of 145 in the past 20 years, and alarmingly 28 in the past 16 months.

We know that maritime workers are generally aware of the risks associated with entry into confined spaces, but they may not be aware of the details and extent of the varied dangers posed by forest products, coal, iron ore, grains, gases and other cargo.

As such, ITF emphasized it is not enough for a worker to rely on opening the hatches for 30 minutes and hoping for the best, or to do the best they can to protect themselves on their own.

It is also not enough for workers to take all available precautions but sometimes still be caught without sufficient protection by pockets of gases and lack of oxygen.

Last November, two dockers died while unloading logs from the hold of a bulker in Montevideo, likely following exposure to an unexpected fumigant they were not told about.

A crew member saw them in distress and entered the hold wearing a face mask, determined to rescue them. During his efforts to assist, his mask was reportedly removed, and he passed out, eventually landing in hospital in an induced coma.

A third docker required medical help before the tragic incident was over.

Shipowners have a duty of care for their crew and dockers employed to carry out their cargo operations. Education and procedures are not optional.

The ITF Dockers’ and ITF Seafarers’ sections will be at the IMO working with shipowners to ensure that the regulations governing confined space stand up and are strong enough to protect all maritime workers.