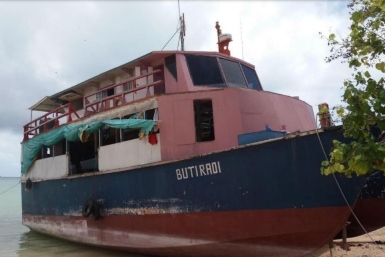 An independent commission has released its report into the loss of the ferry Butiraoi in the South Pacific off the coast of Kiribati last year, finding that the vessel was “unsafe” and could reasonably be “expected” to sink in the conditions it experienced. 95 passengers and crew lost their lives when she broke up and sank off the atoll of Nonouti.

On January 18, 2018, the wooden catamaran ferry Butiraoi took aboard 89 passengers, 13 crew and about 30 tonnes of cargo at Nonouti. She had recently gone aground three times without any immediate follow-up or repairs, and two weeks earlier, a local marine surveyor had ordered her not to carry passengers due to an insufficient number of lifejackets. Even if Butiraoi had been licensed to carry passengers on the accident voyage, the number on board was in excess of permitted limits.

When she exited the port and reached open water, she experienced an easterly wind of about 10-15 knots and waves of up to about eight feet. About half an hour into the trip, the main cross-beams between the catamaran pontoons towards the bow began to fail. The vessel made several loud noises, but the master did not turn back. Two hours later, the hulls began to separate, and the superstructure – including the wheelhouse and upper cabins – collapsed inwards. She broke up and ultimately sank.

As the passengers and crew made to abandon ship, they launched the Butiraoi’s two inflatable liferafts and two aluminum workboats. One liferaft was punctured by the wreckage of the vessel. The survivors overloaded the second liferaft, tearing off its floor and leaving only the tubes available for flotation. About 30 made it into the two workboats and 30 others crowded into the second liferaft. The master remained behind, and survivors reported seeing him “sitting on one of the capsized hulls with some passengers, obviously dazed, regretful and sorry.”

No distress call was issued, the EPIRB was not activated (or failed to activate), and the marine authorities had not been notified of the Butiraoi’s departure when she left harbor. No immediate SAR response was mounted.

After three days of drifting, one of the two workboats capsized. The chief mate cut the line holding it to the other workboat in order to prevent both from going under. 30 survivors remained aboard the final boat.

After eight days, the Butiraoi was finally reported missing at the port of Betio, and a search was launched. 10 days after the Butiraoi sank, a New Zealand P3 Orion maritime patrol aircraft located the sole remaining aluminum boat. By this point, there were only seven survivors aboard. 95 others did not survive, and “most if not all victims . . . died from hunger, dehydration and hypothermia.” One died in childbirth in the midst of the ordeal.

The commission found that the vessel’s destruction was “something to be expected” in bad weather, given the Butiraoi’s maintenance record and her recent groundings. In addition, it blamed the captain for failing to maintain adequate discipline among his crew, allowing his vessel to be overloaded, and failing to organize a coherent and effective response when the vessel was in distress.

In addition, the commission faulted the vessel’s operator for the long delay in mounting a search and rescue operation. It determined that the operator “failed to provide adequate information early” to first responders, “provided false and misleading information to the Commission,” and “showed indifference by showing no concern to the safety of the passengers and the crew.”