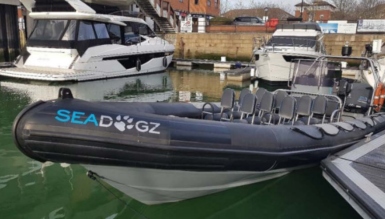 On 22 August 2020 at 1011, the commercially operated high speed passenger craft Seadogz collided with the North-West Netley buoy in Southampton Water at a speed of 38.4kts. On board was the skipper and 11 passengers. During the collision two passengers were ejected overboard into the water where their lifejackets inflated. The remaining passengers and the skipper suffered varying degrees of impact injuries. A 15-year-old girl, was fatally injured when she was thrown against the handrail directly in front of her bench seat.

Urgent safety considerations
– the skipper was operating Seadogz single-handedly, at high speed and did not see the navigation buoy, which was directly ahead for 10 seconds before impact
– during the trip the passengers became accustomed to passing close by large navigation buoys at speed and were therefore unconcerned at the crafts approach to the buoy and did not attempt to alert the skipper
– high speed figure of eight turns completed during the trip, increased the risk of hooking or spinning out

Statement from the Chief Inspector of Marine Accidents, “There are many aspects to this tragic accident, and the MAIB’s investigation is ongoing. However, there are some immediate lessons that can be learned now that will help avoid a repetition this summer, which is why the MAIB is releasing an interim report. In response to an MAIB investigation in 2010, the Passenger Safety on Small Commercial High Speed Craft & Experience Rides Voluntary Code of Practice (CoP) was published. The Code was written by industry experts to recommend and promote common safe working practices for the industry. What is concerning, is that few of the safe working practices in the voluntary CoP were being followed on the day of the accident. These rides can provide excitement, entertainment and fun, and for this reason they are popular. However, this dreadful accident saw nine people sustain very serious injuries and tragically cost the life of a young person. As the holiday season approaches, I want to remind operators that they also have a duty of care for their passengers, and safety should not be compromised in pursuit of a thrill.”

Recommendation
A recommendation (2021/109M) has been made to all UK operators of small commercial high speed craft such as Rigid Inflatable Boats, sports boats and other vessels engaged in carrying passengers on trips and charters to review the risk assessments for the operation of their vessels and take measures, as appropriate, to ensure that they comply with the safe working practices and standards contained in the Passenger Safety on Small Commercial High Speed Craft & Experience Rides Voluntary Code of Practice. Where an operator cannot comply with the provisions outlined in the Code of Practice, steps should be taken to mitigate against risk, and details of those measures included in the relevant operating procedures.