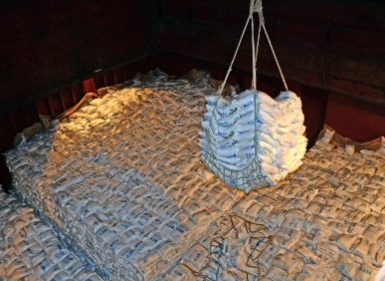 The carriage of bagged rice cargo is a potentially hazardous undertaking, with claims potentially running to millions of dollars when problems arise, says the Britannia P&I Club. The major issue with cargoes of bagged rice is the formation of mould or caking which can often be attributed to condensation due to inadequate ventilation, water ingress, moisture migration and improper dunnaging.

Other issues include:
– Shortages due to pilferage;
– Damage to bags which are torn;
– Slack or lost overboard during stevedore operations;
– Infestation and fumigation problems;
– Hold cleanliness.

Cargo holds should be properly cleaned and prepared, ideally to grain standards. The accepted definition of ‘grain clean’ is provided by the National Cargo Bureau in the United States which states that:

Compartments are to be completely clean, dry, odour-free and gas-free. All loose scale is to be removed. In general, the holds should be clean, dry and free of residues from previous cargo and with no rust scale. In practice, for bagged rice cargoes, the holds should be dunnaged and the rice packed in polypropylene bags which together should provide protection from any limited dirt present in the holds.

The crew should closely monitor weather conditions and close the holds promptly if rain or poor weather is expected. They should not rely on shippers, agents or surveyors to make such assessments. Rain wetting of part loaded holds is particularly problematic, as the water drips between the bag layers and affects an unknown quantity of bags.

Fumigation is often a phytosanitary requirement of the destination importing country. It is also necessary as bagged rice cargoes can often be infested prior to loading in warehouse storage or on barges. Good sealing of all hatch covers, vents and accesses as necessary for fumigation to be effective.

The most widely used fumigant is phosphine (hydrogen phosphide PH3) applied in the form of solid aluminium phosphide. It must be noted that phosphine gas is highly toxic and flammable, colourless, and, when pure, it is odourless.

Typically, aluminium phosphide tablets are impure, and the gas may smell of garlic, carbide or decaying fish. The fumigation process requires a relatively long period of time to work completely.

A typical in transit phosphine fumigation exposure period is seven to ten days. Methyl bromide is used in situations where a rapid treatment of spaces or commodities is required and fumigation can normally be completed in less than 48 hours.

Methyl bromide use now tends to be for strict quarantine purposes rather than routine fumigation as it is an ozone depletor and its use is being phased out. Where fumigation using methyl bromide is carried out, the IMO’s guidance should be followed, with fumigation to only take place in port, with the crew disembarked.