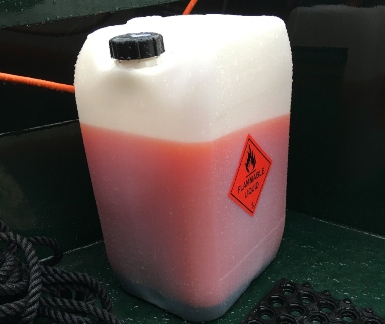 The lobbying campaign, mounted by The Cruising Association, Royal Yachting Association (RYA) and British Marine which the three supported in various ways, has argued successfully that having two colours of diesel would cause fuel supply problems and impact on safe sailing in the UK.

The decision allows for easy refuelling in England, Wales and Scotland and will avoid the logistical and environmental difficulty for the fuel supply industry of changing from red to white diesel, they say. Now pleasure craft in Great Britain will be able to use red diesel and pay fuel suppliers the difference between the red diesel rate and the white diesel rate, on the proportion intended for propulsion use.

For heating purposes, a vessel with a separate tank will still be able to use red diesel at the lower duty rate. The percentage relief scheme for heating use, for a craft with one tank, is to be announced.

In Northern Ireland however, recreational boaters will no longer be able to use red diesel for propelling craft. This is to ensure the UK meets its international obligations under the Northern Ireland Protocol of the Withdrawal Agreement, says the RYA. ‘It will also align with fuel used by private pleasure craft in the Republic of Ireland, which the government believes will make it simpler for private pleasure craft users to access the fuel they need if they sail between Northern Ireland and the Republic of Ireland (and vice versa).’ The RYA says the government expects the change to white diesel to be in force by June of this year.

The Cruising Association (CA) believes the government concluded that removing the entitlement to use red diesel in the commercial sector (including water borne freight, ferries, fishing vessels, operating at sea or inland) would have a detrimental effect on businesses’ finances and viability.

‘The entitlement to use red diesel in these sectors has been kept by Her Majesty’s Government beyond April 2022, as otherwise marinas and ports would have had to stock two colours of diesel,’ a CA statement says. ‘This would have been uneconomic.’

“The government has accepted that it will not change the treatment of private pleasure craft in Great Britain and we will continue to be able to use red diesel and pay our fuel supplier the difference between the red diesel rate and the white diesel rate on the proportion we intend to use for propulsion.”

The RYA’s director of external affairs, Howard Pridding, says the RYA has a long history of engaging with government on the issue. He says the RYA is grateful to HMRC officials who have listened and taken pragmatic decisions.