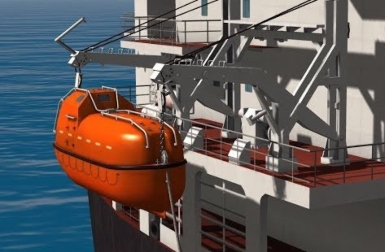 During an annual lifeboat safety inspection it was discovered that the on-load cable release could not easily be moved, and the release lever required extreme force to operate. The forward hook cable release also did not operate properly. A replacement cable release arrangement was procured locally, and repeated tests were conducted to confirm that it was once again fully operational.

The post-event investigation noted that the company’s shipboard safety operations manual required the lifeboats to be inspected on a weekly and monthly basis.

According to the vessel’s logs, the monthly lifeboat inspection had taken place three weeks previously and had included an abandon ship drill during which both lifeboats were unhooked and manoeuvred in the water. However, the poor condition of the lifeboat release system was not documented, and nothing was reported back to the company. The company’s safety manual provided specific and comprehensive instructions for inspection and testing. If these had been properly implemented, then the defect should have been identified in an earlier inspection.

It is also vital that the responsible officer assigned to conduct lifesaving appliance inspections and tests has received the necessary training. It is equally incumbent on the company under the ISM Code to ensure that training is sufficient. Procedures issued by manufacturers should be scrutinised for feasibility. For example, the manufacturer of lifeboats and the davits in which they are housed will often be different.

Since their introduction, on-load and off-load release systems for lifeboats have caused death and serious injury to crew when the operating systems have not been properly checked, maintained, and tested. The system should be regarded as a single point of failure unless fall preventer devices (FPD) are fitted.

Because of previous incidents, when it comes to lifeboat inspections, companies are understandably risk-averse. The situation is not helped by the substantial number of port authorities which do not allow boats to be launched within harbour limits. These factors can lead to a culture of falsifying records to appear to be compliant.