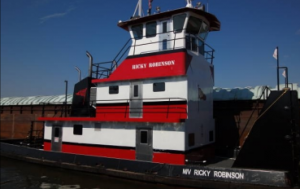 The US National Transportation Safety Board (NTSB) issued an investigation report on the sinking of the towing vessel ‘Ricky Robinson’ on the Lower Mississippi River, in December 2017, which caused death of the two crewmen onboard, oil discharge and significant damage of the vessel.

On 8 December 2017, about 11:26 local time, the Ricky Robinson capsized and sank on the Lower Mississippi River at mile 732.8 near Memphis, Tennessee, with two crewmembers on board, after the towing vessel began taking on water.

The pilot made a distress call just before the sinking; neither crewmember was found during the search and rescue operations that followed.

When the vessel was recovered 9 days later, the deckhand’s body was discovered inside the wreckage; the pilot is presumed to be dead. Approximately 200 gallons of diesel oil were released into the river. Damage to the Ricky Robinson was estimated at $1.5 million.

The National Transportation Safety Board determines that the probable cause of the sinking of the towing vessel Ricky Robinson was the pilot’s decision to proceed with unsecured deck hatches at a speed that resulted in water on deck and flooding of the aft voids.

Contributing to the sinking was the company’s inadequate oversight to ensure that crews kept hatches closed while the vessel was underway and that ongoing watertight issues with the voids were addressed.

Maintenance issues and other conditions affecting the safe operation of a vessel should be promptly reported to the operating company. Reporting systems should provide specific guidance regarding critical equipment, hull integrity, and operational safety.

A robust reporting system should also include procedures for company oversight to ensure that crews are reporting issues and that the operating company is tracking and promptly addressing them.