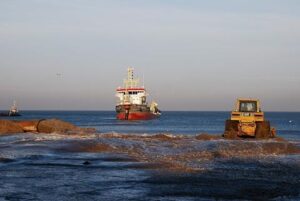 A proposal to ban the worldwide dumping of sewage sludge into the oceans has been made to the IMO by South Korea and Mexico. The proposal is being made some 50 years after the ’Convention on the Prevention of Marine Pollution by Dumping of Wastes and Other Matter 1972’, known as the ‘London Convention’, was drawn up to protect the marine environment from human activities.

In 1996 it was updated to include a so-called ‘reverse list’, which listed certain wastes that could be dumped – and it included sewage sludge. This latest proposal seeks to remove sewage sludge from the list of waste considered acceptable to dump in the sea.

In fact the practice is already widely prohibited under regional conventions, a worldwide review of current practices found, and through domestic legislation.

Bans on dumping radioactive and industrial wastes were implemented in the 1990s, and the 1996 protocol was different in that it named substances that could be dumped rather than those that would be banned.

“Since then, the London Convention and Protocol have evolved to regulate emergent technologies, including carbon sequestration and marine geoengineering – very much relevant to today’s ocean and climate change agenda,” the IMO says.

Whether to adopt the proposal will be decided at the next meeting of contracting parties in October. If it is removed from the list then, it will go in force 100 days later.