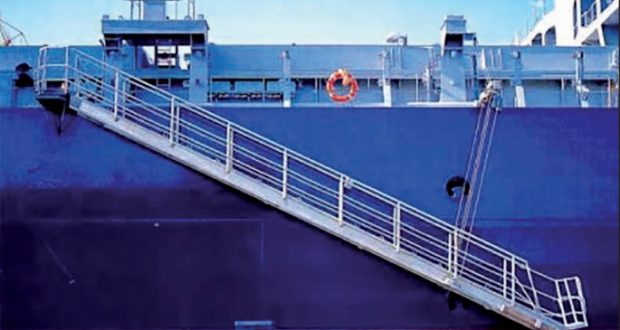 Once the 190m-long bulk carrier was moored alongside, the three crewmen were sent to rig its starboard accommodation ladder. The accommodation ladder was in its stowed position and needed to be unstowed, lowered to the quayside and rigged ready for use.

The top of the accommodation ladder was hinged onto a turntable, which in turn was mounted on a platform attached to the ship’s deck. The access platform at the bottom of the ladder was fitted with a set of collapsible handrails on either side.

The turntable at the top of the accommodation ladder was secured to the platform with a bolted central pivot pin, and was supported by two sets of roller bearings.
Upon investigation, it was found that the failure of the accommodation ladder was due to the corrosion of the central pivot pin, which had caused the turntable to detach from its support platform. In addition, the turntable’s roller bearings were completely rusted and had seized solid. The surrounding metal structure of the platform was also wasted due to corrosion.

According to the ship’s maintenance management system, the ladder, turntable and support platform should have been inspected and greased on a monthly basis. It was evident from the post-accident inspection, that the greasing point in the centre of the turntable had not been used for some time. It was also evident that the roller bearings could not be inspected or greased without unbolting the turntable from the platform, and dismantling it. There was no record of this task ever having been done.

Lessons learnt
Accommodation ladders and their supporting platforms are often located in areas exposed to the weather. They are particularly vulnerable to salt water spray, which can accelerate metal corrosion if not adequately protected.

The importance of routine preventative maintenance is clearly demonstrated in this incident where three crew members were badly injured. It is very easy to miss out that one inspection or maintenance routine, particularly if at first glance the equipment looks in good condition, and proper inspection or maintenance would be difficult and time consuming. However, as in this case, looks can be deceiving, and the more accessible, well painted topsides of the turntable masked the poor condition of the structure beneath.