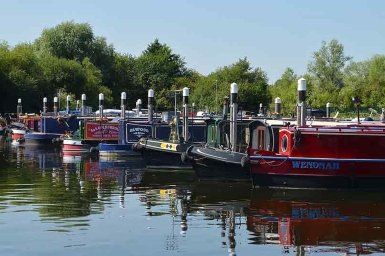 “The patient is being left to die.” Those were the stark words used by Paul Rodgers to describe how grave he sees the situation that UK holiday hire companies, boatyards, boatbuilders, training operations, marinas, boat clubs and other waterways businesses find themselves in thanks to the collapse in business following the COVID-19 related shutdown.

There are now fears among waterways bodies of the demise of much of the sector as a result of the loss of this summer’s business – unless an immediate rescue package is put together.

Mr Rodgers, National Chairman of The Inland Waterways Association, was addressing a video-link meeting of the All Party Parliamentary Group for Waterways (APPGW) at which four waterways bodies – IWA, navigation authorities the Canal & River Trust (CRT) and The Broads Authority (TBA), plus industry organisation British Marine (BM) – were putting the case to MPs for Government support. He pointed out that back in March, the waterways groups had provided detailed information to Government department Defra and requested urgent assistance, followed by a full analysis based on 250 responses to an IWA survey across all types of business, but that from the “disappointing” response received since then, it appeared that Defra “didn’t understand”. Stretching his analogy with “the patient”, he said that the waterways business sector “should be in the Intensive Care Unit, but after six weeks it’s still in initial triage. And even the triage system is flawed”.

Richard Parry, CRT Chief Executive, said he “supports all that Paul has said”, and that there was “frustration” about what support was available as “the mechanisms don’t reach most of the waterways businesses”, chiefly for two reasons. Firstly, much of the Government’s relief is based around relief of business rates – but many waterways business have small premises (or even none at all if they’re based on boats). And while there is also local authority cash available, it’s discretionary, there are criteria to be satisfied, and it’s taking time to set up. And secondly, taking advantage of the availability of Government loans to tide them over would be “not prudent business management” if the need to pay back the loan fell foul of the seasonal tail-off of business as the winter arrives, with no means to repay the debt. Losing this summer’s trade is “like facing three winters in a row”, as Mr Parry put it.

Add to that the timing of the lockdown, just as financial reserves were at their seasonal low-point in early spring – not to mention some having been hit by winter’s bad weather closures – and many will have “no option but to cease trading”.

But how bad is the wider effect on the waterways? Quite apart from the vital services they provide for boaters and other users, there’s the financial impact. TBA’s John Packham provided the MPs with some figures: hireboat and other trade on the Broads provide £3.6m (£2.5m of it in licence fees) directly to the Authority annually – without which he said that licence fees for private boaters would need to rise to keep pace with maintenance costs, risking reducing access “to the privileged few”. And the wider impact of its demise would see the loss of £400m to the local economy, 400 equivalent full-time jobs all winter, and “a catastrophic decline”. And that’s just the Broads. Nationally, the sector is worth £1.5bn to the economy.

And yet waterways holidays, once it’s regarded as safe for them to begin operating (and Richard Parry stressed that in the meantime “we absolutely get that keeping people safe is the necessity”) could be extremely valuable to the country, even more so than usual. They might be exactly the sort of ‘staycation’ the Government is suggesting that those who would normally holiday abroad might take – at least when they actually bother to make it clear (as one hireboat operator pointed out) that when they say “You can’t have a holiday this year”, they actually mean “You won’t be having a foreign holiday this year”. It would be a disaster if this demand arrived just as the hirers shut up shop.

So what are the organisations proposing? Basically, they believe a fund in the region of £20m of public money should be set up by the Government, administered by navigation authorities, to be fed down to waterways businesses to enable them to survive. And that it needs to be done within weeks, as “the window is closing”.

However Mr Rodgers emphasised that the two items – firstly the requirement for immediate intervention to prevent businesses closing, and secondly the need for support for “ramping up” over the following two to four months – must be kept separate, to avoid diluting the message that help is needed now.

So will their efforts succeed? Will the official letter being sent by APPGW to the Secretaries of State at Defra, the Treasury, the Department for Culture Media & Sport, the Welsh Government and the Tourism Secretary persuade them to provide a specific dedicated £20m fund for waterways businesses? Will it ward off what Mr Rodgers described as the biggest crisis facing the canals since the fight to save them in the 1940s? Broadland MP Jerome Mayhew played down its chances, on the grounds that there are many sectors with problems: “What is unique about the waterways?” But Mr Rodgers responded: “It’s not just a letter – it’s a very detailed analysis of surveys. It’s evidence that this is a unique sector.”