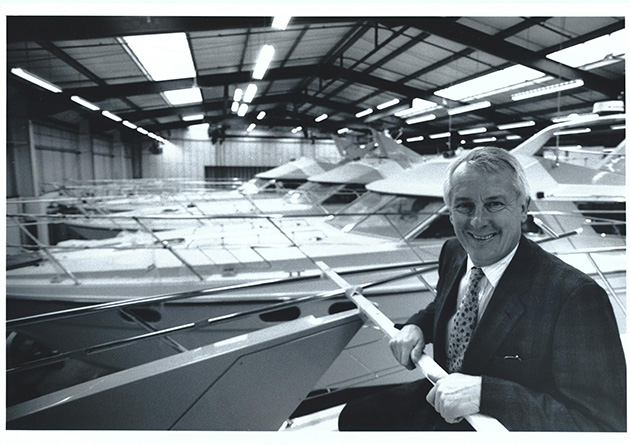 Sam Newington, the man who built Fairline into one of Britain’s leading boat manufacturers, has died peacefully at home aged 82. The family’s involvement with the marine industry began in 1964 when Sam’s father Jack Newington converted a gravel pit in Oundle, digging a trench to link it to the River Nene. Oundle Marina was created, the basis for a small inland waterways and marina business that hired and repaired boats. It was originally something of a hobby alongside the family’s main business of frozen foods. In 1966 Jack bought a mould for a 19ft glass fibre boat from a failing company. That boat became the Fairline 19 and Fairline was born.

Sam Newington signed up to the RAF straight from school, joining RAF Cranwell – the entry point for those wishing to become permanent officers. He graduated top in academic work and became a fighter pilot flying Hawker Hunters in Germany. Following the Suez crisis, Sam became disaffected with the political situation at that time and left to join his father’s frozen food business. Frozen chickens didn’t hold Sam’s interest either, and when the business was sold he left to pursue an MBA at Columbia University in New York before returning to the UK to work for global consultancy firm McKinsay as a management consultant.

After Jack Newington voiced an intention to sell Fairline if Sam didn’t become a part of the business, he joined the firm in 1970. At the time the company had just 21 employees working out of the Oundle Marina site.

Jack and Sam ran the company together for a brief period, with Jack taking increasing time off as Sam got more involved. A keen boater who had many cross channel trips under his belt, Sam Newington brought both his management acumen and love of boating to bear, introducing a 25 footer and then the 23 Holiday which went on to sell 600 units over the next 12 years.

Fairline grew rapidly under Sam’s command, and the Fairline 40 launched in 1977 allowed the company to expand into Mediterranean markets. By 1979 the company was employing 140 people and turning over £5 million a year.

His management style was very ‘hands on’, getting involved with the design as well as the manufacture of Fairline boats. The Targa range was created directly as a result of Sam and his wife Briony’s boating experience. With a holiday home at Port Grimaud in the South of France, the couple naturally kept a Fairline there, a 26ft Sunfury. It was their need for a larger boat that saw the creation of the hugely successful Targa 33 in 1984 that went on to sell over 350 units over the following seven years and spawned the entire Fairline Targa genre.

In total Sam and Briony owned 18 Fairline boats, testing a different model each year by taking it to their holiday home in France. Everyone at Fairline knew when they had arrived as the faxes would start coming in detailing changes that Sam wanted making which would need to be actioned immediately.

In 1986 Fairline was awarded the Queen’s Award for Enterprise, International Trade and in 1996 Sam retired, selling Fairline Boats to South African Graham Beck (who also owned Princess Yachts International) having run the company for 26 years.